Illuminating the Realities of Climate Change

As we near the end of the Reduce Energy Use DC pledge period this week, we want to highlight one more crucial topic: the realities of climate change, and remember, you still have time to take the REUDC pledge HERE.

According to NASA, the current warming trend is particularly significant because it is extremely likely (greater than 95% probability) to be mostly the result of human activity since the mid-20th century and it is proceeding at an unprecedented rate.* There is much evidence for human activity pointing to the rapid climate change our planet is facing, but there are also many ways that each of us can work to help change this. 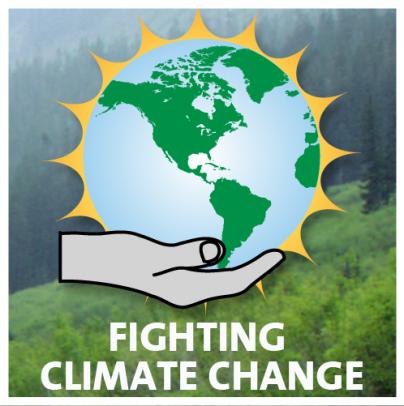 Climate change realities:
1. Global temperatures are rising. The planet's surface temperature has continued to rise since the late 19th century, a change driven primarily by increased carbon dioxide emissions into the atmosphere and other human activities. Every year, factories, power plants, and vehicles pump tens of billions of tons of carbon dioxide into our atmosphere. Even if all greenhouse gas emissions were halted tomorrow, the carbon dioxide already in our atmosphere will hang around for decades and continue to heat the planet.
2. Warming ocean temperatures. Changes in ocean temperatures and currents brought about by climate change will lead to alterations in climate patterns worldwide.
3. Shrinking ice sheets. The Greenland and Antarctic ice sheets have decreased in mass. Data from NASA's Gravity Recovery and Climate Experiment show Greenland lost an average of 279 billion tons of ice per year between 1993 and 2019, while Antarctica lost about 148 billion tons of ice per year.*
4. Sea levels are rising. A warming climate can cause seawater to expand and ice over land to melt, both of which can cause a rise in sea level. With many Americans living in coastal states, rising water levels can have potentially large impacts.
5. Extreme weather events. More frequent and intense extreme heat events can increase illnesses and deaths, especially among vulnerable populations. While increased precipitation can replenish water supplies and support agriculture, severe storms can damage property, cause loss of life and population displacement, and temporarily disrupt essential services such as transportation, telecommunications, energy, and water supplies.*

We have talked about how you, your family, and your business can help combat the realities of climate change in our blog HERE. As a reminder, here are some of the ways you can help.

1. Speak up! Talk to your friends and family about this issue, and make sure your representatives are making good decisions.
2. Make improvements to your home. Power your home with renewable energy sources. If this seems like an unattainable option for you or your family, you can make your space more energy efficient by sealing drafts and ensuring it’s adequately insulated. When shopping for refrigerators, washing machines, and other appliances, look for the Energy Star®label. The simplest way to make your home energy efficient is to replace your lightbulbs with LEDs, which use up to 80 percent less energy (and the investment makes your energy bill cheaper in the long run). Read more about energy-saving appliances here.
3. Reduce your water waste. Saving water reduces carbon pollution, too. For example, take shorter showers, turn off the tap while brushing your teeth, and air dry your clothes in the summer. Read more about the benefits of water conservation here.
4. Unplug your devices. Unplug rarely used devices, don't leave fully charged devices plugged into your home's outlets, and, if possible, adjust your computers and monitors to automatically power down to the lowest power mode when not in use.
5. Consider switching to a fuel-efficient vehicle, and reconsider trains, planes, and automobiles. Gas-smart cars, such as hybrids and fully electric vehicles, save fuel and money. In addition, choosing to live in walkable cities and towns with quality public transportation leads to less driving, less money spent on fuel, and less pollution in the air.

You still have a few days left to commit to combatting climate change in Washington D.C. by taking the pledge and implementing some of the steps we discussed above.